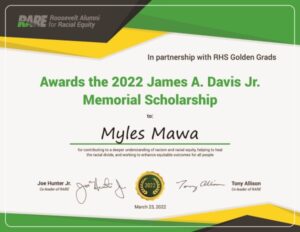 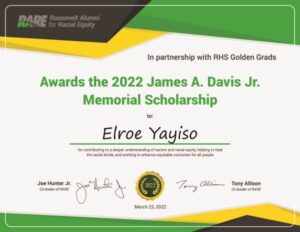 Roosevelt Alumni for Racial Equity (RARE) has awarded two scholarships to two deserving students of color who will graduate from Roosevelt this June.

Elroe Yayiso and Myles Mawa, seniors at Roosevelt High school, will each receive $5,000 to further their educational studies after high school.

Meet our agents of change! 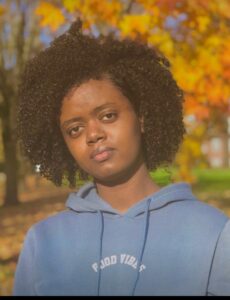 “Racial Equity to me is when everyone has the same opportunities regardless of race, and applying justice and common sense to a system that has been out of balance.”

Elroe is planning to study Computer Science at Howard University this fall. Her passion and wisdom will help her become an agent of change for women of color in STEM fields. She has proven her leadership at Roosevelt and in the community with participation in many groups and organizations, co-founding the Women in Tech Club, the Girls for Code program and the Making Connection program at Roosevelt; attending the United Negro College Fund program, a teen advisor for the Elias Park Project, vice-president of the Black Student Union and a member of the National Honor Society.  Elroe also ran track for Roosevelt which helped her learn to inspire and work well in teams.  Next she will run to Howard University where she will continue as an agent of change. With supportive parents and a passion to learn and make a difference in the world, Elroe will be the first in her family to attend college. 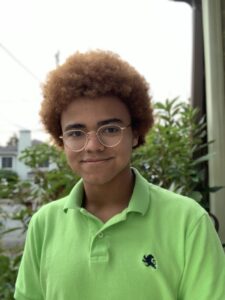 “To me, racial equity starts with restorative justice.  Deconstructing and reconstructing systems to work for and not against black and brown students, while very needed in order to serve the community, will mean nothing if an olive branch is not extended to students and people in general who have been burned by a society who wrote them out of its exclusive contract.”

With a joyous personality and a voice of education for Roosevelt, Myles is our second scholarship agent of change.  Myles has explored his own identity, and with his friend groups has learned more about the subtle but traumatic racism so many have been experiencing.  Using his social media platform, he has voiced his opinion on combating the nuances of complacency culture. Myles is proud to be a part of the Planned Parenthood South King County Teen council and has helped coordinate Black Lives Matter panels for the Black Student Union as their Vice President, constructing introspective questions that allowed panelists to accurately explain their experiences and non-panelists to self- reflect on their own. He has also arranged to speak with the staff on creating more conversations and collaboration on the norms that put anti-racism at the forefront. Other activities include being the Editor in Chief of the 2021/2022 yearbook, the captain and choreographer for the Roosevelt Dance Team, co- president of the Kpop Club and a director, actor and dancer in Drama productions. Hoping to be accepted to USC, watch him dance his way into making a change.

The scholarships honor the memory of James A. Davis Jr., a Member of Roosevelt’s class of 1971 who passed away in 2013.  RARE was formed by Davis’s Classmates who wanted to improve racial equity at the school. The Group has also funded a documentary film, Roosevelt High School in Black and White, which reflects Seattle’s Voluntary Racial Transfer program and its successor, Mandatory Busing, which sought to desegregate the city’s schools.