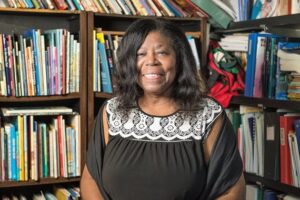 That’s how speaker Dr. Cherry McGee Banks described the three verses of Lift Every Voice and Sing, the song that is also known as the Black National Anthem. Banks shared the history of the song in context of the time in which it was written. It is one of the first examples of Black history and people that was written into Western music.

Banks, a professor of Educational Studied emerita at the University of Washington, Bothell, researched the song as a labor of love and claims to not be an expert on the topic. Yet she presented a complete history of the song, its writer and its composer, and its use to this day.

The poem that became the song’s lyrics was written by James Weldon Johnson, a poet, writer, and civil rights activist born in 1871. The music was written by his brother John Rosamond Johnson, a musician and composer born in 1873. Theirs was a middle class family. Their father was born free, and their mother was from The Bahamas. The family settled in Jacksonville, Florida where they were educated. James was graduated from Atlanta (now Clark Atlanta) University. Rosamond, a music prodigy, was graduated from The New England Conservatory in Boston.

James wrote the poem in honor of Abraham Lincoln’s birthday and in honor of Frederick Douglass’ February 14 birthday – a birthday that he chose for himself as a free man because birthdates of enslaved people were not recorded. The poem reflected Black life in post-Civil War America.

Banks said that the song was written during a “time of blossoming” for Black Americans. Black colleges were being founded. Black fraternities and sororities were being formed. The African Methodist Episcopal (AME) church was founded. The poem was published in the Daily American, an early Black newspaper.

After the music was written, the song resonated with the country’s Black population. The National Association of Colored Women’s Clubs published the song and encouraged its singing at their meetings. Writer Victoria Earle Matthews called the song an anthem, giving the song sanctity. Lyrics were also published in The Crisis, the publication of the NAACP, which had been formed in 1909.

The song was sung – and is still sung –on Emancipation Day, also called Juneteenth. Rep. James Clyburn of South Carolina proposed in February of this year that it become the national hymn.The first stanza is one of praise, Banks said.

Lift every voice and sing,
’Til earth and heaven ring,
Ring with the harmonies of Liberty;
Let our rejoicing rise
High as the listening skies,
Let it resound loud as the rolling sea.
Sing a song full of the faith that the dark past has taught us,
Sing a song full of the hope that the present has brought us;
Facing the rising sun of our new day begun,
Let us march on ’til victory is won.

The second stanza is a lament.

Stony the road we trod,
Bitter the chastening rod,
Felt in the days when hope unborn had died;
Yet with a steady beat,
Have not our weary feet
Come to the place for which our fathers died.
We have come over a way that with tears has been watered,
We have come, treading our path through the blood of the slaughtered,
Out from the gloomy past,
’Til now we stand at last
Where the white gleam of our bright star is cast.

Finally, the third stanza is a prayer, which added to the sanctity of the song, Banks said.

God of our weary years,
God of our silent tears,
Thou who has brought us thus far on the way;
Thou who has by Thy might
Led us into the light,
Keep us forever in the path, we pray.
Lest our feet stray from the places, our God, where we met Thee,
Lest our hearts drunk with the wine of the world, we forget Thee;
Shadowed beneath Thy hand,
May we forever stand,
True to our God,
True to our native land.[33]

James went on to work for the NAACP and was later a diplomat who served in Nicaragua and Venezuela. He was the first Black faculty member hired by New York University and later taught creative writing at Fisk University, one of the historically Black Universities. He died in a car accident in 1938.

Rosamond continued composing, writing with musicals with composing partner, Bob Cole, and performed in several of them. He wrote books about music with his brother. He died in 1954.

Lift Every Voice and Sing continues to resonate with the Black community, but you can’t understand the meaning of the song without knowing the history of Black people in America, Banks said.

“Ethnic studies tells us who we are as a nation,” she said.