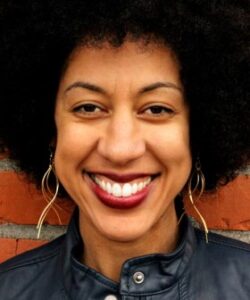 Erin Jones’ unique life story has given her a special lens through which to view race. As a mixed race woman who was adopted by a White couple and raised primarily in The Netherlands, she had to become “culturally Black” to adapt to life in the United States when she returned to attend college.

As a result, she approaches discussion about race with compassion and curiosity. Jones, author of Bridges to Heal Us and a former candidate for State Superintendent of Public Instruction, shared that perspective with RARE at its February 28 Open Discussion session online.

She began by encouraging all questions. She taught middle school for 15 years and believes that she has heard it all.

Born in St. Paul, Minnesota, her White birth mother’s family would not permit the baby to come home. Ultimately, she was adopted by a White couple who were committed to taking a baby that nobody wanted. Her parents were immediately disowned by their families. Eventually, she was accepted by her paternal grandparents, but not her maternal grandparents.

When her parents decided to move to the Netherlands to teach, she attended the exclusive private school that served diplomats children. One of her fondest memories was when she met Egyptian First Lady Jehan Sadat and singer John Denver who visited the school to encourage the students to commit to peace. Jones was impressed by the light-skinned Black woman and saw her as a role model.

Jones decided to return to the United States to attend college and was accepted by Princeton University and Bryn Mawr College. She chose Bryn Mawr but was in for a cultural shock. The nearby Lower Merion Cricket Club had a sign that welcomed visitors but specified “no Blacks or Jews.” But when she made her way to near-by Ardmore, she found the community where the Black people who worked in Lower Merion and Bryn Mawr lived.

At six-feet, she played basketball and once found herself in a pick-up game with Julius Erving, who at the time was unknown to her. At the same time, she also met some kids who she discovered didn’t attend school. No one missed them in the classroom, they told her.

That’s when she decided to become a teacher.

Now, at age 50, she says that she is glad to have lost her election for State Superintendent of Public Instruction because she is free to advocate for equity.

When asked if she was shocked when she returned to America, she said that her parents tried to prepare her. Her parents bought her books by Black authors and about Black America. But it wasn’t enough.

“I didn’t know how to be culturally Black,” she said. She didn’t anticipate the low expectations that she experienced in college. Also, she didn’t fit in with Blacks or Whites. Now, although mixed race, she specifically presents herself as Black.

Likewise, she doesn’t present herself as a Christian, instead calling herself a “Jesus girl.” Evangelicals have hijacked Christianity, she said. Her husband served as a pastor of an evangelical church that gradually moved from 90 percent White to 70 percent White – that is, until the 2016 election cycle.

“America has weaponized faith,” she said. She and her husband discovered that what he preached from the pulpit was contrary to messages being given in Sunday school. Diverse membership declined.

When she was asked to describe equity, she defined it as the ability to thrive on one’s own terms. For that to happen, people must accept that thriving means something different to everyone. Not everyone will thrive by using the dominant culture’s norms. Meeting people where they are helps build bridges, she said.

Jones served as Assistant Superintendent of Public Instruction before running for the top job. While sitting on the SPI cabinet, she was the only one who had taught in the preceding 20 years. Only four others had spent any time in the classroom.

“They were making policy about things that they had zero information about,” she said. “Leaders need personal connections with the public.” In that light, she encourages people to connect with their leaders, especially those people who would be the most negatively impacted by decisions.

She also said that students need to be heard and encourages students to write letters to leaders.

For the teachers who claim not to know anything about other cultures, she urges them to visit restaurants in various communities. “See how people engage,” she said.

In restaurants, patrons can notice if the culture is noisy or quiet, if the pace is leisurely or fast, if interactions are personal or gruff. Her experience growing up in Europe taught her that Europeans are honest and forthright. Americans use politeness to lie to one another, especially in context of “political correctness.”

“What does rigor mean?” she countered. “We wouldn’t need ethnic studies if we taught complete history. Ethnic studies is history.”

A recording of the session is available on RARE’s Open Discussion page.