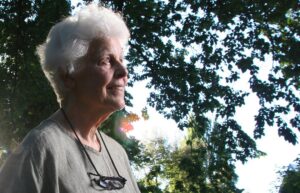 “When you bring people together around a purpose, good things happen.” —Kay Bullitt

Well-known Seattleite and philanthropist Kay Bullitt passed away on August 22, 2021 after a long life that included decades of social activism that, in part, helped bridge racial divides in the highly segregated Seattle School District. She was 96.

Ms. Bullitt was born in Massachusetts in 1925 and attended Radcliffe College, which is now part of Harvard University. It was during her college years that she saw the unlimited potential of young Black children and benefits of early integrated education while working at a community center that served African American children among others. After graduating she worked with farm laborers and became active in fair labor practices. In her later life, she traveled the world and to the Soviet Union in particular, in anti Nuke efforts to lesson the threat of nuclear annihilation.

But it was here in Seattle where she established interracial preschools and camps in Northeast Seattle and the Central District that had profound positive effects on many young Seattleites. She established the first voluntary racial transfer program that set up an exchange of students, including her own children, between Lowell and Madrona Elementary Schools.

Whether it was bringing young African American children together with young White children or, in one of her last endeavors, bringing Jewish and Arabic children together for camps at Warren G. Magnuson Park, Ms. Bullitt saw the benefits of communication and shared goals that bound all children of different backgrounds together in play and in learning.

The Seattle CivI Rights and Labor History Project based at the University of Washington posted a tribute to Ms. Bullitt after her passing. It contains a series of thirteen short videos in which Ms. Bullitt gives a fascinating oral history of her endeavors. In the first eight videos she focuses on her undertakings in early integrated education and recalls how children of different races played and learned well together. She lauded the beneficial educational successes the were born from working with parents and local leaders, many with recognizable names: Judge Charles Z and Eleanor Smith, Henry and Eleanor Seigl, Revered Samual and Eleanor McKinney, and Forbes Bottomly to name a few.

Thorough, erudite, and pleasant, Ms. Bullitt tells what went right with school integration in Seattle and what went wrong. The videos reveal a woman who saw things that were flawed and inequitable and made them better. Whether it was bringing children of different backgrounds and races together, advocating for peace, and even establishing the first all-women owned savings and loan, Kay Bullitt was a doer who during her lifetime made Seattle and the world a better place.

Unfortunately, Seattle Schools are almost as segregated now as they were when Kay Bullitt strove to lesson the racial divide some sixty years ago. Now RARE is taking similar action to lesson that divide. It is in the same spirit of Ms. Bullitt’s quest of bringing people of different races and backgrounds together to form new relationships that RARE is implementing Connections, a program to engage students from different schools in a variety of fun and interesting activities.

Kay Bullitt saw the benefits of integrated education that made for a stronger community. What better way to honor her legacy than to continue the worthwhile work that she started?

The Seattle Times ran an insightful article on Kay Bullitt after her passing.