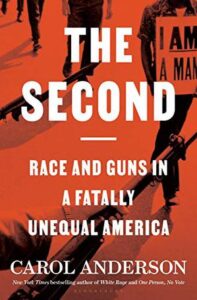 uly of 2016 an African American man, Philando Castile, was pulled over by the police in suburban St. Paul, Minnesota for supposedly resembling a robbery suspect. Castile, who was driving with his finance, Diamond Reynolds, cooperated and let the officer know that he had a legally permitted gun in the car. Minnesota is a right-to-carry-a concealed weapon state. The cop panicked and fired anyway.  As Castile lay dying, Reynolds cried out, “Why did you shoot him, sir?”

The death of an American citizen who offered no resistance yet was killed by the police while legally possessing a gun is a scenario that would normally elicit strong condemnation from the National Rifle Association, just as its president, Wayne LaPierre, had bitterly done in the wake of federal raids after warrants were served for weapons violations at the Branch Davidian Compound in Waco and at Ruby Ridge, Idaho. LaPierre had excoriated federal law officials, calling them “government thugs” who wanted to “take away our constitutional rights” and “seize our guns”. After Castile’s killing, the NRA was silent. When pressed, an NRA spokesperson said that it was “important for the NRA not to comment while the investigation was going on.”

The Castile killing is the first of of dozens of historical episodes exposing constitutional inequities regarding the Second Amendment that are covered by Carol Anderson in her book, The Second—Race and Guns in a Fatally Unequal America. Anderson, an author and Emery University professor, provides an historical look at the Second Amendment and what she see as its skewed applications in favor of White Americans, often at the peril of unprotected Black Americans.

The Second’ is a short read of 165 pages. In them, Anderson details the birth of the Second Amendment and the inequities of its aftermath. Designed by Patrick Henry and other Virginians, the Second Amendment, Anderson argues, was a sought-after green light to form militias that they thought were desperately needed to combat potential slave revolts. Fearful that a new federal government consisting of a majority of northern states would hesitate before sending an army south to protect slavery, Henry and other southern state leaders insisted upon inclusion of the Second Amendment in the proposed Bill of Rights. In exchange, they would give the necessary votes to ratify the new constitution. They got it.

Anderson narrates episodes with powerful prose and makes a compelling case in which she claims, with documented support, that the Second Amendment, from forming militias to the right to possess a gun to current day stand your ground laws, has provided cover for White Americans while leaving Black Americans defenseless and often victims of carnage. The book’s premise is that the Second Amendment is steeped in anti-Blackness, born of anxiety over slave revolts and, after emancipation, the fear of armed Black Americans. This fear, she points out, was evident when Southern colonial leaders opposed enlisting Blacks into the Continental Army, a resistance that George Washington ignored. As did Andrew Jackson forty years later in the War of 1812’s Battle of New Orleans. In both instances African Americans fought and were a critical force in both of those American victories.

After ratification of the Constitution as well as the Second Amendment, several states passed laws prohibiting Black citizens from owning guns. Though Anderson does not mention the siege and destruction of the Black business community in Tulsa that garnered the nation’s attention during its centennial anniversary, she documents similar episodes in which armed White mobs stormed Black neighborhoods and businesses—in some instances after the Black communities had been disarmed by local officials.

Black civilians were not the only targets of armed White mobs. Black militias that had kept order Louisiana faced violence and costly injustices as enraged Southern Whites who feared the sight of armed Blacks waged deadly assaults on them. In Colfax, Louisiana political chaos threatened to overturn a recent election. A local Black Republican ordered the Black militia to protect the courthouse. Outnumbered by the KKK on Easter Sunday of 1873, the militia was slaughtered. By the time federal troops arrived hundreds of African American soldiers were killed, including sixty who had surrendered. Colfax was just one of similar episodes covered by Anderson where Black Americans came under assault for being legally armed.

Anderson’s constructs of an anti-Blackness Second Amendment weave through American history right up to the present. She bookends The Second’ with accounts of other Black Americans cut down by police for being armed. Most tragically were the 2018 police killing of a Black security guard who had secured and held at gunpoint a shooter at a Chicago nightclub and the 2015 police killing of Tamir Rice, a twelve year old child, for possessing a toy gun in Cleveland. In a tragic and sad irony, Anderson noted how police in Kenosha, Wisconsin, patrolling the streets during protests in the summer of 2020, waved at and even offered a bottle of water to Kyle Rittenhouse, a seventeen year-old self-described “patriot” who walked the streets with an illegally obtained AR15. Minutes later, Rittenhouse shot and killed two protesters.

The Second-Race and Guns in a Fatally Unequal America takes an interesting look at one of today’s most controversial amendments, one that often dominates political campaigns. Anderson notes that the book is neither “pro or anti gun”. She states that guns are not the key “variable” in the Second Amendment and its history; the variable, she states, is Black people.

The Second’ has received generally favorable reviews. The New York Times had mostly positive words for the book though it objected as overstated Anderson’s claim that race played a role in the writing of the Second Amendment.  Below are two additional reviews.