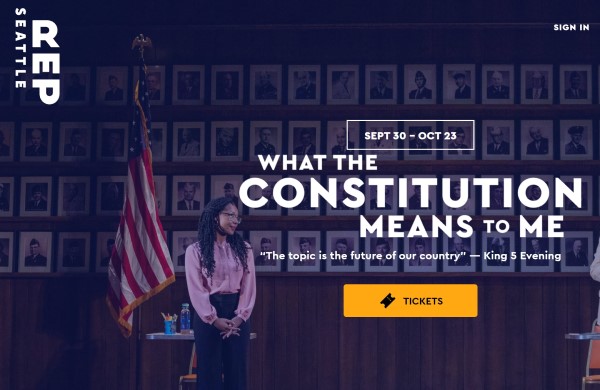 RARE scholarship winner Leah Scott is appearing on stage at the Seattle Repertory Theater as herself.

Scott appears as “youth debater” in The Rep’s production of “What the Constitution Means to Me,” which opened on Wednesday, October 5. The play by Heidi Schreck reimagines her time as a high school debater at American Legion competitions. She talks about the US Constitution in context of her life, noting the gaps in the document concerning the rights of women, people of color, and members of the LGBTQ community.

The last portion of the one-act play features actor Cassie Beck as she and Scott debate over whether the Constitution should be re-written, which Scott begins by introducing herself as a University of Washington student. Finally, she and Beck ask one another random questions about their lives as the stage fades to black.

Audience members are given copies of the Constitution, sponsored by the American Civil Liberties Union. The play runs through October 23.

Scott was one of the first two winners of RARE’s James A. Davis Jr. Memorial Scholarship.