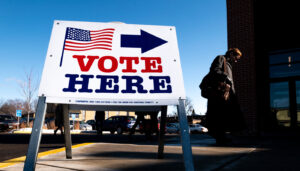 The right to vote is a fundamental right that has expanded in America since its founding in 1776, when voting was limited for various reasons such as property owning requirements and stipulations regarding race and gender.

The first large expansion of suffrage was a result of the 15th Amendment. Ratified in 1870, five years after the abolishment of slavery, it granted Black males the right to vote. In 1920 the 19th Amendment expanded suffrage to women. In 1965 the United States Congress passed and President Lyndon Johnson signed into law The Voting Rights Act of 1965 which, in part, gave federal oversight of several Southern states that had prevented African Americans from voting either by the threat of violence or by Jim Crow Laws. Black disenfranchisement lasted nearly 100 years after the end of Reconstruction. The final expansion came in 1971 when the 26th Amendment lowered the voting age from 21 to 18.

The state of Washington over the course of the last few decades has enacted laws that make voting effortless and secure. Secretary of State Kim Wyman, a Republican, was sought out for advice by several of her counterparts before the 2020 general election as they increased their mail-in voting due to the pandemic. Surpassing 85%, our state’s turnout last November was one of the highest in the country.

Over the last decade, beginning in 2011 when Republicans won majorities in several midwest states, voting laws have been passed that have come under severe criticism by civil rights groups who see these laws as barriers to voting that negatively and disproportionately affect Black Americans. Proponents of these laws claim that the laws increase voting security.

The Supreme Court in 2013, in a 5-4 decision in which five Republican appointed justices constituted the majority, overturned the federal oversight provision of the Voting Rights Act of 1965, thus giving the green light for more alterations of voting laws., As of June of this year, according to the Brennan Center for Justice, 18 states have enacted 30 new laws that restricts Americans voting.

Since the 2020 general election scores of states have introduced bills and some have passed laws affecting voting. States controlled by Republican legislative majorities have passed several laws with new voting restrictions. While Democratic-led states have enacted laws that expand voting opportunities.

The Brennan Center For Justice based at Columbia University Law School in New York City, gives a thorough “Roundup” of all the various voting bills and laws, both restrictive and expansive, that have moved through or are moving through legislatures. The Brennan website gives a detailed description of how all the proposed legislation restricts or expands voting opportunities as well as proposed changes in voting oversight in several states.

The Brennan Center is known as a progressive group and it does post what it sees as “alarming” trends that seek to undermine election officials’ autonomy. The site notes expanded powers of partisan poll watchers who could prove intimidating. Some bills want to limit the powers of secretaries of state who were the targets of scorn for expanding mail-in voting during the pandemic.

Regardless of the Brennan Center’s leaning, it does provide an accurate and thorough look into all the bills and laws that have or could affect the long-held right to vote in America.