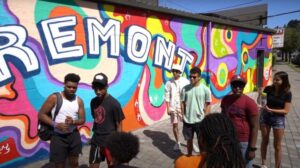 As we continue our interviews with students who participated in the Connections summer pilot program this past July, their responses demonstrate that new experiences, knowledge and friendly ties resulted from the summer activities.

One student, now a junior at one of Seattle’s south end high schools, , stated that he came across Connections when he was looking to find either a summer job or learning program. “To me, the name ‘Connections’ meant connecting with your peers and to others. I wanted to see what that was all about.” He joined the program and found that it more than met his expectations.

He had several favorite activities. “I liked the Debate. It was a lot of fun working together, using our brains to brainstorm what to say about a hard topic.”

He also found the BikeWorks Justice Journey through Chinatown/the International District to be meaningful as well as fun. “The message that I had was about getting a chance to understand that Asian culture is a living culture. I learned about the shifting of communities coming in. That was so cool because usually I’m just going through Chinatown/International District and didn’t know.”

The visit to the Theo’s Chocolate factory also left an impression. “I had figured that Black people would have something to do with the labor of the chocolate plants, but I didn’t know that white settlers brought it to Africa.” After the visit to Theo’s, he even researched more about chocolate with his aunt. He recommends that other students visit a chocolate factory to learn more about the history of a food that nearly everyone loves.

The student also relished the opportunities to develop leadership skills, pointing out that another activity he liked was a “Present Yourself” project. “I had to think about myself and who I was, and then tell the others. It was like I had to do a commercial about myself, which was pretty cool. . . So now, I felt more that I’m an unspoken leader, speaking up when it’s necessary – when it’s important.”

Although he’s following the Instagrams of some of his fellow Connections students, he’d like to meet up with them soon, even though they all go to different schools. His advice for students who might like to do a Connections program offered at their school? “Let the student know that you’ll gain more, learn more. It was successful for me. I liked it. I thought it was good.”