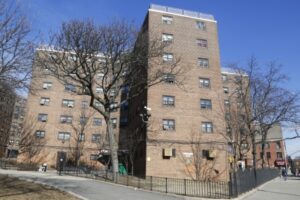 They were two of America’s most consequential programs but, for the most part, they didn’t help black citizens.

The Servicemen’s Readjustment Act of 1944 and its subsequent amendments, commonly known as the GI Bill, provided a range of benefits to U.S. military veterans, including low-cost mortgages, low-interest business loans, and dedicated tuition and living expenses to attend high school, college or vocational school. Public housing projects expanded the inventory of homes for veterans to buy. Subsidized housing, an outgrowth of the public housing program, provided – and still provides — rental assistance for low-income households. Together, the programs ended up contributing to racial segregation that remains evident to this day.

Fisher explained that the programs were supposed to help Americans readjust to life after World War II and to keep people out of poverty by controlling housing costs. The GI Bill provided financial help to veterans and their families, but the law was deliberately designed to accommodate southern Jim Crow laws by leaving the administration of the programs up to the individual states. In northern states, Black Americans were denied loans and mortgages by banks and mortgage agencies that continued to honor redlining customs and unenforceable covenants.

Likewise, blacks were kept out of higher education. Two-thirds of black Americans lived in southern states, but most southern universities refused to admit black students until the civil rights movement of the 1960s. About a quarter of those that did were “sub-baccalaureate” institutions. If a black student earned a baccalaureate degree and wanted to continue to higher degrees, they could choose colleges in just seven states with schools that offered post-baccalaureate degrees to students of color. Virtually no colleges offered engineering or doctoral degrees to black students.

Meanwhile, the New Deal public housing program was supposed to address a housing shortage, Fisher said, and was not a program for poor people. In fact, it was designed for unemployed and working-class white families. Housing projects for blacks and whites were built separately and were not integrated – at first.

“Vacancies in the white projects were created primarily by the Federal Housing Administration program to suburbanize America,” Fisher said. Subsidized mass production builders created subdivisions that were “whites only” in keeping with redlining and covenant that were prevalent in the 1930s, ‘40s and beyond.

Projects for black residents were built in the cities, usually where factories were prevalent, were more likely to be high rise apartment buildings.