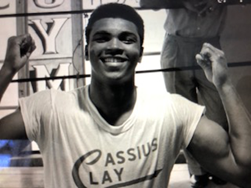 The name Cassius Marcellus Clay has held a prominent place in America’s political and cultural history for nearly two centuries. Grand and Romanesque, it was a name worn by two renegade Kentuckians of spirit and courage whose lives advanced freedom and equity.

The first Cassius Marcellus Clay, born in 1820, was a Republican politician from Kentucky. An ardent abolitionist, Clay founded an anti-slavery newspaper, The True American, in 1845. Ten years later, Clay granted land for Berea College, the first integrated co-educational college in the South, a radical idea in 1855. The college was attacked and closed by a pro-slavery mob in 1859 and reopened after the Civil War, only to have the Kentucky legislature make integration in schools illegal. Berea was allowed Black enrollment again in 1950. (Dr. Chad Berry of Berea College was a RARE Open Discussion guest in June.)

Clay’s zeal for emancipation and equality so impressed Herman Heaton Clay, a fellow Kentuckian and a descendant of slaves, that nine years after Clay’s death in 1912, he named a son after him.That son in turn named his first-born, Cassius Marcellus Clay Jr. in 1942. The latter would gain fame early in life as a precocious boxer known around Kentucky as the Louisville Lip. Later in life, he’d be known around the world as Muhammad Ali.

The similarities between the two Clays extend well beyond the name. Both were flamboyant, loquacious, and undaunted. Both were beloved and despised.

The original Clay’s abolition activities and bombastic rhetoric didn’t go over well with many of his fellow Kentuckians. An assassin for hire, Sam Brown, shot Clay in the chest during a political event. Clay not only took Brown’s best shot, he chased him down, and using his beloved Bowie knife sliced off Brown’s nose and ear. When pro-slavery mobs threatened to storm the offices of The True American, Clay mounted cannons at the building’s front and lined its offices with knives, swords, and guns. He had two get-away hatches installed on the roof. Those were for the employees. “Cash” would stay and fight if necessary.

The Clay who would become Muhammad Ali had his share of opponents: the wrath of the federal government fearful of Black uprisings and vocal opposition to the ongoing war in Vietnam, the spying by the FBI, and the scorn of a predominantly aging white press who expected the Black athletes whom they wrote about to be modest and restrained. And in boxing’s heavyweight glory days, he fought the menacing and powerful likes of Sonny Liston, Joe Frazier, and George Foreman. Like the abolitionist, the younger Clay took some shots but almost always won.

The elder Clay, spurred into action by a speech by William Lloyd Garrison, devoted his life to slavery’s abolition, even in the face of violent opposition. The younger Clay, thrust on to the worldwide stage after astonishingly winning sport’s most glamorous title at twenty-two, fought against the legacy of slavery that kept him and his brother from the amusement park near his home where they could hear the laughter of white children at play that was forbidden to them. He later took a stand against being drafted into a dubious war into which Black Americans were disproportionately drafted.

In an era where Blacks were expected to toe the line in white dominated America, Clay not only told the world he was the greatest (and the prettiest), he took bold stands on politics, religion, and race and became a legend in and out of the ring.

Audacity in the face of long-held prejudices has its price, and both Clays paid dearly. Yet both prevailed and received recognition from presidents and are kindly regarded by history.

The greatness of the human spirit should be remembered and celebrated. There were two such spirted, principled Americans who at birth were given the same noble name. Both left an impression on history and helped grow American democracy. The younger Clay, a poet at times, reflected on the name that he loved, but without hesitation gave up:

Marcellus vanquished Carthage
Cassius laid Caesar low…..
So when the gong rings
And the referee sings out, “The Winner,”
Cassius Marcellus Clay
Will be the most Roman of them all.