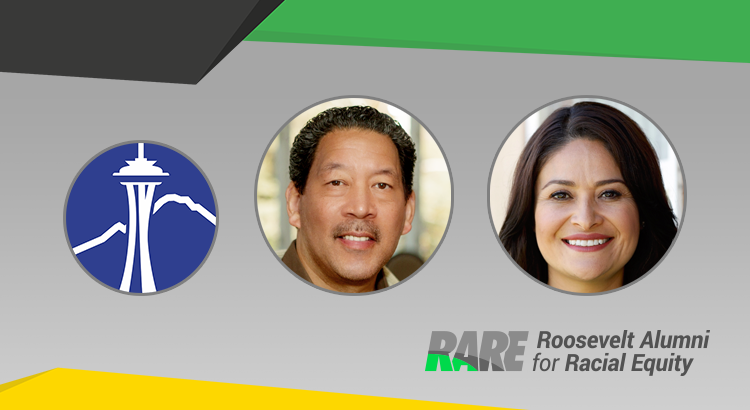 The candidates for mayor of Seattle shared their hopeful visions for a more equitable city with Roosevelt Alumni for Racial Equity at the group’s monthly open discussion on October 11.

Bruce Harrell, a former city council president, and M. Lorena Gonzalez, the current council president, spent back-to-back 45-minute sessions with RARE members and guests to answer identical questions that explored their views on equity in housing, education, and race relations in the city.

Harrell, 63, was born and raised in Seattle’s Central Area and was graduated from Seattle’s Garfield High School and the University of Washington, where he was a member of the Husky football team. Biracial – his father was Black, his mother Japanese – he has always looked for acceptance.

It’s time for an “all hands on deck” approach to improve equity, he said. He recounted his role in passing a police body camera law as one example of the issues he tackled while serving on the city council. He also helped pass a race and social justice law and has vowed that his cabinet will be diverse.

Harrell said that he is deeply concerned about Seattle’s homeless problem, noting that Seattle and King County are the most expensive places in the state to live. High cost of living is just one factor that contributes to homelessness. Slowing growth will help with housing costs. The city should also take steps to keep people in their homes by increasing tax exemptions and housing production to address affordability.

On education, Harrell said that the school district and the city have a fragile, adversarial relationship, but the schools need resources. Because they are separate entities, the city has no role in governing the schools. Instead, the city should do all it can to support kids outside of school. The city can support K-12 students with before and after school programs and use city resources as a safety net.

“We produce good scholars,” Harrell said but agreed that the best learning occurs in diverse situations. “We must understand implicit bias and work to remove it.”

Gonzalez, 44, was born in Prosser and raised in Grandview. She grew up as a child of migrant farm workers and attended Yakima Valley College’s Grandview campus. She earned a business degree from Washington State University and later earned her law degree from Seattle University. Her life with farm workers shaped her work in civil rights, she said. She is the first Latina to be elected to the Seattle City Council. She succeeded Harrell as council president.

“I want to channel my energy to foster hope,” she said. The Covid epidemic revealed inequity and Seattle must build back better. Our systems should support everyone, she said, and we must challenge our own assumptions about race.

Racial equity is not an extra-curricular activity, she said, noting that equity issues should be front and center. Echoing Harrell, she too said that racial equity needs an “all hands on deck” approach.

About the schools, Gonzalez said that she has a direct line into the Seattle School District, and she wants to make sure that our schools are supported. She would like to see more of students of color graduate from high school. Black, indigenous and other children of color are not ready for kindergarten.

Integrating housing in Seattle would help school integration, she said.

“We don’t invest in teacher diversity,” she said. “Identity of the teachers matters.”

RARE is a nonprofit charity and does not support or oppose any candidates running for public office. Ballots for Seattle voters are due no later than election day, November 2. Incumbent Jenny Durkan did not seek reelection.