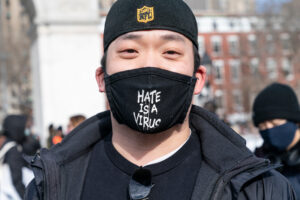 Overt racism has reared its ugly head again over the last five years.  And yes, I blame Donald Trump and his white supremacy base.  Trump’s hate filled rhetoric has targeted Native Americans, Mexicans, Syrians, Muslims, Africans, American congresswomen of color, Black athletes, a Black President and all of China for the “Kung Flu.”  The most powerful leader of the free world has normalized arrogant, overt racism to cheers from thousands of like-minded Americans.

This step backwards in American human decency is frightening. Being silent to hate rhetoric implies agreement.  If enough people keep quiet about Mexicans being “rapists,” or Congresswomen of color needing to “go back from where they came,” or blaming Asians for the “Kung Flu,” it becomes part of the American lexicon.  It becomes accepted fuel for hate crimes.  It becomes the reason white supremacists feel justified and emboldened to eradicate color from the country.

Asians have been the most recent victims of hate crimes.  Because it’s easy.  Easy is what bullies and racists excel at. It was easy in the 1880s to round up defenseless Chinese along the West Coast when jobs were being lost to those Chinese who would work for less — and then drown them in the Pacific Ocean.  By 1882 the US Government passed the Chinese Exclusion Act. It was easy to imprison 120,000 Japanese Americans during WWII when three-fourths them were children.  It was easy to kill Asian women working in spas when they had no weapons or notice of impending doom.

Fear propels racism. Racists fear losing economic, cultural and political power.  They fear having a level playing field – what if they lose?!  Well guess what? Change may be slow, but its unstoppable:  projections place whites being in the minority in American by 2045, according to the US Census Bureau as cited by PBS.  But fear also keeps us from fighting racism.  Fear keeps us quiet – what if we offend friends and family?  What happens if fear defines our future?  If fear defines our future, we can look forward to never beating racism.  Never claiming racial equity.  Never attaining the American Dream – for ANY American.  Lose-lose.

Living in predominantly homogenous Montana, it is hard to speak up against racists…particularly our neighbors, friends, relatives, community members don’t even know how offensive they are. They think they are not touched personally by racist acts in other parts of the country…not in our backyard?  No prob… 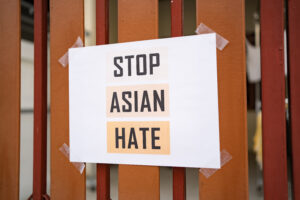 Montana used to be fiercely independent.  Montana elected Jeanette Rankin, the first female congresswomen to the US House of Representatives in 1916, four years before the 19th Amendment guaranteed women the right to vote.  Until 2020, this red state had a Democratic governor for 16 years.  Locally, voters had campaign signs in yards promoting candidates from both parties.   That changed dramatically after four years of Trumpism.  We are now so red we bleed.  It means racism did not get planted by Trump. It was always here, just smoldering, waiting for someone to fan the flames.

Fighting fear and hate is hope.  Hope and an acceptance of the responsibility we have as Americans for human justice.   The reality of the past five years in politics means more and more people are stepping outside comfort zones to confront racism 1:1. It is not easy. It is not comfortable. It is not popular. It is not fun.  It is the job we didn’t ask for, but whose importance is understood.  One sentence at a time.  One friend at a time.  One email at a time.  Join the fight.

Robin Uchida Lange is a 1971 graduate of Roosevelt High School. She currently lives in Montana.