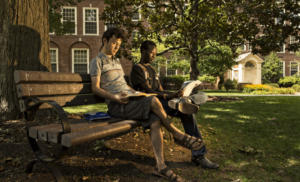 Berea College is a college unlike any other, says Dr. Chad Berry, vice president of alumni and college relations, and he’s right.

Berea’s founding principles hold to this day and the college remains integrated, charges no tuition since its inception, pays students to work on campus, and students are gifted with a school laptop computer upon graduation.

Dr. Berry spoke to RARE members and guests on June 20 for RARE’s Open Discussion, along with two recent graduates. Seventy to 80 percent of students come from Kentucky while other students come from around the United States and 70 different nations. All the students are low-income and might not otherwise have access to a college education.

Founded as a Christian college by abolitionist John Gregg Fee, the school was unpopular because it admitted Black students. Kentucky was a slave state and Fee was run out of town as a result, Berry said. Fee spent the Civil War years in Cincinnati raising money for Berea. It was the first integrated co-educational school in the south.

Berea’s motto is “God hath made of one blood all peoples of the earth.” For many students, they are experiencing diversity for the first time.

“All were welcome with impartial love,” Berry said. Berea stands for educational opportunity, liberal arts, equality, supportable and sustainable living, serving Appalachia, and Christian values. The college is not aligned with any specific Christian denomination.

Berea practices “radical inclusion,” he said and serves only the underserved.

Among its most notable graduates is Carter G. Woodson, co-founder of Negro History Week, now known as Black History Month.

Until the 1890s, Black students slightly out numbered White students. But in 1904, a law that forbade mixing races was passed in Kentucky and Berea split into two schools. The law was amended in 1950 and the school immediately re-integrated.

Berry shared how the college’s work program instills the dignity of labor in each student. All students work and sixty percent of students return a portion of the money to the school and keep enough for housing and food.

Graduate Jordan Berry (no relation to Dr. Berry) said that after his experience as a minority scholarship student in a private high school, Berea was a breath of fresh air. His high school was 98 percent White, but as a student of color, Berea’s radical inclusion made him feel welcome and at ease in the college.

“Education is not just in the classroom,” he said. “Students share issues and experiences. It builds empathy.”

Madeline Kujabi, a 2022 graduate from The Gambia (Kujabi used the country’s proper name), was familiar with Berea’s values while she was in high school in her native country. She applied to Berea and all the Ivy League colleges without knowing how she was going to pay tuition. Although the Ivies didn’t admit her, Berea did, and she was able to attend. Like Jordan Berry, she felt right at home.

First year students learn Berea history, learn how to navigate the United States, and learn how to honor people’s differences, she explained.

Kujabi’s mother valued education for all her children, not just for her sons. In The Gambia, parents are more likely to educate their sons because boys will use the fruits of their educations to benefit the family. Conversely, daughters leave the family. So, the family is less likely to invest in their education. She was educated despite tradition and her mother worked hard to see that Kujabi’s education was realized.

Both alumni commented the feeling of family that the college imparts upon its students, and both were enthusiastic about leaving a place better than they found it. Berea students are known for mobilizing to help communities in need, they said.