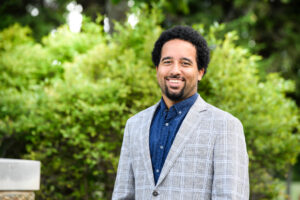 When Alex Manning played for Garfield High School’s racially diverse football team it had a terrible win-loss record and ever since he has wanted to know why.

Now, after conducting studies on the relationship between race and sports, Dr. Alex Manning better understands. He shared results of his studies with Roosevelt Alumni for Racial Equity at the group’s August 16 discussion session where he explained how race, class and gender operate through sports.

Although he played high school football, soccer and baseball, ultimately, he focused on youth soccer for his doctoral work. Manning earned his Ph.D. in sociology from the University of Minnesota and is an assistant professor of sociology at Hamilton College in Clinton, NY. He explored why sports function as a social institution, why sports means so much to people, and how sports are connected to power, inequality, racism, sexism and homophobia.

Manning said that youth soccer has many lessons to offer about race and sports outside of elite and spectacle sports that Americans associate with college and professional sports. He contends that despite its massive presence in this country, youth sports are not taken seriously. Still, participatory sports are closely intertwined with economics, family time, and social time.

He conducted interviews with parents, players and coaches over more than five years. The study was conducted in the Twin Cities while he was completing doctoral studies at the University of Minnesota. He divided his time among alternative youth soccer organizations that gather for fun more than for the competition, elite or professional academies that train players who have exceptional talent, interscholastic soccer and organized travel soccer teams. He noted that there are even soccer teams formed to keep kids out of trouble, what he called “risk prevention” soccer.

The Twin Cities are predominantly White with 25 percent of the population comprised of people of color. The demographics of the area are shifting to include Somalis, Hmong, Latinx and Karen (Burmese) communities. He was able to focus on how race flows in and out of play, he said.

Manning said that he found “happy diversity talk” in those neutral areas he calls “cosmopolitan canopies” in which teams gather to play. Such canopies are places that offer respite from lingering tensions and are most often found in inner cities. But he also found “racial ruptures” where he found instances of overt and biological racism and saw racialized interactions by youth participants. Examples included referees banning Spanish from being spoken on the field when Latinx teams are playing, or a Latinx player being harassed by a White player (“I hope Trump wins the election so that he can deport all you Mexicans”). When such events happen, they are reported to coaches and referees in a matter-of-fact manner.

He remembers his high school football coach warning the team that they might face harassment from White teams.

In other instances, Manning told of how team members are sometimes placed in positions by race. For example, it used to be that football teams didn’t have Black quarterbacks because Black players were not considered smart enough to lead a team.

“Existing in these diverse spaces does not disrupt or overcome biological race stereotyping,” he said.

“People are navigating and making sense of a messy racialized social environment,” he said. “They can fail to get to the heart of racial realities, racism and inequities, both within soccer and beyond.”

Ultimately, sport is an arena of comprehensive racial learning, he said.

As for that bad high school football team, he determined that they were hampered by fewer resources than White teams, he said. Also, they didn’t score enough points.