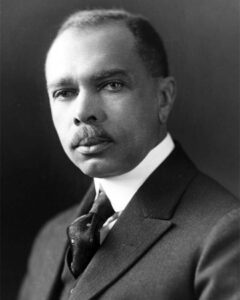 RARE’s Open Discussion on March 28, 2022 featured University of Washington-Bothell Professor Emeritus, Cherry A. McGee Banks’s presentation on Lift Every Voice and Sing, long recognized as the America’s Black National Anthem. In her lively and informative presentation, Professor Banks noted the varied and accomplished life of the song’s co-writer, James Weldon Johnson, who penned the song’s lyrics to the musical score of his brother, J. Rosamond Johnson.

As the article from Black Past notes, James Weldon Johnson was not only a gifted musician and lyricist, he was, among a vast array of other professions, a lawyer, having passed the Florida bar in 1896 and becoming one of the Florida’s few Black attorneys. Soon after eschewing law, Johnson became a school principal, improving the curriculum and adding two grades to the Stanton School in Jacksonville. After Stanton, he founded Jacksonville’s first Black newspaper before heading to Broadway and teaming up with Rosamond, writing and selling songs for Broadway performers. In 1900 James and Rosamond wrote what was to be a tribute to Abraham Lincoln and became the Black National Anthem, Lift Every Voice and Sing.

In 1906 Johnson joined the diplomatic corps, appointed as a consul to Venezuela by Theodore Roosevelt. In 1912 he wrote his acclaimed novel, The Autobiography of an Ex-Colored Man which helped usher in the Harlem Renaissance. In 1914, Johnson was named editor of New York Age, considered one of the leading Black newspapers of its time. In 1916 Johnson became the first African American Field Secretary of the NAACP, and greatly increased its membership. And in 1917, Johnson organized one of the largest, if not the most unique protest marches in the country’s history: the Silent March down 5th Avenue in New York City. Also known as the Silent Parade, between 10,000 to 15,000 men and women marched silently to protest recent lynchings of young Blacks, that included a male teenager, in Waco and Memphis and the mass killings of Black citizens in what is known as the East St. Louis Riots. The march was designed to grab the attention of President Woodrow Wilson, and as the clip shows, it was such a sight to behold that it could not have easily escaped Wilson’s attention.

Accomplished and distinguished as he was in a multitude of fields, it was in writing that Johnson soared. Before his death in a car accident in 1937, Johnson had published several novels and books of poetry and of Negro Spirituals.

Prolific as he was, it is Lift Every Voice and Sing and his first novel, The Autobiography Of An Ex-Colored Man, by which Johnson is most remembered. As noted, the former was penned to commemorate Lincoln’s birthday, yet the song took on a life of its own and spread like a contagion among predominately Black churches and schools to stand alone as an anthem. And for good reason: Opening with noticeable ragtime piano notes of the era before ascending into a hymn, the song’s lyrics pay homage to the struggle of America’s Black ancestors who had “trod the stony road” and faced the “chastening rod”. The song turns into a song of hope and victory in an America that will live up to its founding creed of equality:

The Autobiography Of An Ex-Colored Man was published anonymously in 1912, but didn’t gain notoriety until it was republished under Johnson’s name in 1927. The novel, short but telling, is the first-person journey of the son of a Black woman and white father. He narrates with the detailed insight and candor of Melville, while navigating race, skin color, and class in America at the turn of the 20th century. His travels take the reader from his birth state of Georgia and a middle class upbringing in Connecticut to the highs and lows of New York society and the great capitals of Europe. As a boy, he wasn’t aware of race until his school principal enters his classroom and asks all the white students to stand. Our narrator, who remains nameless throughout the book, stands, but is quickly told to sit. Thus begins the long questioning quest of finding his place in a world where skin color matters.

The novel is autobiographical in a sense that both Johnson and our main character were trained musicians. Indeed, Johnson may have referenced Lift Every Voice and Sing when the main character decides to return from Europe, explaining to his wealthy benefactor and travel companion that he needed to “go back to the very heart of the South, to live among the people, and drink in my inspiration firsthand”. He vows to “work with, not only the immense amount of material (music) I had to work with, not only modern ragtime, but also the old slave songs-material no one had yet touched”. His wondering days were over; it was time to do something important—like writing an Anthem.

James Weldon Johnson’s life was cut short by car accident at the age of sixty-seven, but not before he made a lasting mark as a man of many talents who left a rich legacy of history, hope, and inspiration.