The Seattle Public School district is not doing right by Black people, according to Clyde Merriwether and Gerald Donaldson. 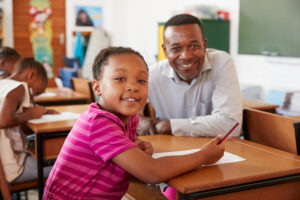 Donaldson, a family resource worker in the Seattle School District and Merriwether, a community activist, led the monthly Roosevelt Alumni for Racial Equity discussion group on February 15. The discussion session is open to RARE volunteers and donors.

Donaldson works at Leschi Elementary School and he sees the ways that Black parents struggle with teachers and administrators as they juggle parent-teacher meetings and other issues regarding their children with jobs and other family responsibilities. How White teachers talk to Black students and parents reveals no apparent concern for specific family situations, he said. There are parents who work two jobs or whose work hours don’t coincide with the times teachers are available for conferences. When parents don’t show up, the absence is often held against the kids in the classroom.

Then there’s the pandemic, which sent children home for online learning. That has revealed a digital divide, Donaldson said. Children may not have access to Wi-Fi, computers or both, putting them at a disadvantage.

“The babies are resilient,” he said, speaking of the children. Online learning is better this year than it was last year.

Donaldson was particularly concerned about how Black students with disciplinary issues are treated. Those children are often inappropriately placed in Special Education classes.

Donaldson and Merriwether share a concern about Black representation in the schools. Whether it’s a lack of Black teachers, administrators or even janitors, Black students are seeing fewer and fewer people who look like them during the school day.

Merriwether has been particularly focused on hiring issues. The district is losing Black employees through attrition and firings but is not hiring new black employees at the same rate in which it hires white workers. Merriwether believes that nepotism and cronyism are to blame. He cited examples in which black custodians are interviewed for promotions but rarely, if ever, get them. He also pointed to black employees who may have titles but no real authority to conduct business.

Merriwether ties the decline in black employment to Juneau’s tenure. Juneau inherited at least four black men in senior leadership, none of whom are currently employed by the district, all of whom have been replaced by white men and women and, in one case, by a black woman.

Donaldson was asked why he doesn’t go into administration.

“I want to stay in the field,” he answered, noting that he doesn’t want to deal with the politics of the district’s administration.

Donaldson said that a high percentage of new hires are from outside the district. “We need to hire from within. They (new hires) need to know Seattle.” Those from Seattle who want to advance their careers usually do so by leaving the district. They usually don’t return.

“We have to recruit our own to join the school district,” Donaldson said.

Other topics included improving guidance counseling, integrating books on black history into the other books on American history in the library, and whether black students and other students of color are encouraged to excel in the classroom.

RARE discussions are held monthly. Donors are invited to attend.