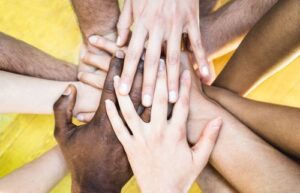 Everybody wants race relations to be better.

So, after George Floyd’s murder a group of Roosevelt High School parents formed Roosevelt’s Racial Equity Committee (REC) to work toward improving the racial climate at the school. Ann Boyd and Natalya Yudkovsky from REC joined Roosevelt Alumni for Racial Equity on April 26 to discuss how they want to help.

It’s not as if parents didn’t know that Roosevelt has an overwhelmingly white enrollment. These parents were already building awareness by reading books like Let’s Talk About Race and other titles when George Floyd was murdered. When that event was followed by several racist incidents among Roosevelt High School students, the group stepped up its activity.

They formed a REC in August 2020 and set goals to create a culture at Roosevelt for students, families and faculty to feel heard and seen. The group had its first community engagement meeting in March.

“We want to deepen understanding (among parents),” Yudkovsky said. “Not just share facts.”

The committee is pursuing an anti-racism agenda and wants to widen the audience for its racial equity work. Part of that is to train leaders in the school to facilitate conflicts between students on racial issues.

Yudkovsky said that the school needs curriculum on ethnic studies, Black Lives Matter and anti-hate instruction. The school needs sustained attention to race and equity. They would like more students of color represented in staff, faculty, clubs and in the PTSA. They also plan to invest in diversity focused groups such as the Black Student Union, La Raza, and the F Word, a feminist group.

With these plans there is only one thing missing from the group – members of color. Boyd acknowledged that only one committee member is a person of color and is planning outreach to more people. They want to avoid falling into a white narrative. Nonetheless, the group is moving forward to address issues that some people forget about  when they talk about racial equity.

Many students are immigrants and need translation services. But translators cost up to $300 per translator per language – a prohibitive cost in almost all cases.

Gail Joseph, another REC member who joined the conversation, spoke about helping students in all areas of life. One example is food insecurity, which the group believes is a social justice issue. The group has created a food pantry and has provided more 700 bags of groceries for Roosevelt families. She was careful to say that the group does not conflate food insecurity and poverty with race.

“We want to be a hub for student support,” she said.

Yudkovsky also would like to see a “training in creating gracious spaces” in order to make everyone comfortable and to make Roosevelt a welcoming space.

When asked about how the group is engaging teachers, Joseph said that teachers have already organized themselves and are creating curricula around race and ethnicity. This is happening slowly, though. She also said that REC is beginning to talk about restorative justice and hopes to create a restorative justice program in the school.