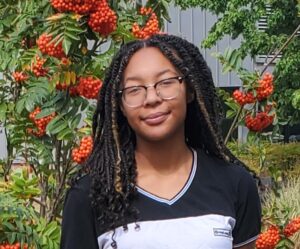 One of the first James A. Davis Jr. Scholarship winners has tweaked her college plans.

She now plans to become a lawyer and wants to focus on criminal justice or constitutional law. Economics didn’t prove to be her real interest after all, she said.

Scott appeared in RARE’s documentary, Roosevelt High School: Beyond Black and White. She said that she hopes to “continue the conversation” with RARE in the future. She joined RARE online for the second scholarship award presentation at the end of March. She was one of two 2021 award winners. Elsabeth Assaye was the other.