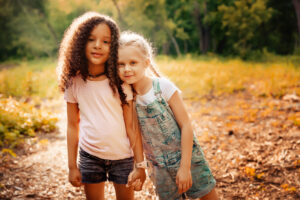 As I learn more about redlining and the details of housing discrimination as part of my association with RARE, I have been reflecting on how it was to grow up black in a white neighborhood. It was challenging, but I also remember that I had protectors. One has recently come to mind, and today I thanked her.

One morning while preparing for school, there was a knock at the door. I opened it to find Mary, a classmate of mine at Bryant Elementary School. To me, Mary was the coolest kid in school – white, pretty, smart and incredibly kind, she was popular. That day, she wanted to walk to school with me.

I was shocked and dumbfounded. I had friends but no one as cool as Mary. I was honored and many times after that, we shared the four-block walk to school.

But there was something that Mary didn’t know – something that I never shared with anyone. Several of the boys from school followed me to and from school to call me “N****r, and to tell me to “go back where I came from,” “get out the neighborhood,” and simply that I should be killed for being there.

We’re talking about seven– and eight-year-olds. They were grubby little white boys who used bad grammar. I ignored them as much as I could.

When Mary started walking to school with me, they stopped – for good. They simply left me alone. Mary didn’t intend to be my protector, but it turned out that she was.

We went all the way through high school together. By ninth grade, I had moved out of the neighborhood. As adults, we have stayed in touch on Facebook. A few days ago, she came to mind and I realized that I had never told her what her friendship had meant to me. It turned out to be an emotional revelation for both of us.

Mary had never known about the harassment. She just wanted to be friends. Those bratty boys were too chicken to continue the name calling in front of her and eventually they decided to take another route home. Mary said that had she known, she would have kicked the snot out of them. She never had to.

I wept uncontrollably as I shared the story with her in a Facebook post. My gratitude was overwhelming and long over-due. She choked up as she replied, she said. We are forever bound by her simple and innocent act of kindness. I’m certain that I wasn’t the only kid suffering the indignity of name-calling in the early 1960s. If any other white kids heard it, they certainly didn’t do anything about it. It was just how things were.

This week, most Americans celebrated the conviction of Derek Chauvin for killing George Floyd in Minneapolis last summer. We hope that it is an indicator of overdue change. But I want us to remember that so much of the progress in race relations has come from the Marys of the world and a simple but radical act of walking a friend to school.