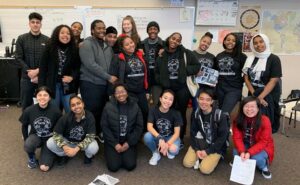 Members of the NAACP Youth Council are demanding to be included and they expect a future in which they are.

Their demands are vision statements for the future. Some of the group’s Seattle-King County members shared the list with RARE committee members and guests at a March 29 discussion held via Zoom, and the list is long. A few of the items on the list are specific to other cities but most are relevant to black, indigenous, and people of color (BIPOC) in Seattle and Washington State.

They were invited to lead RARE’s discussion group, the second such session held in March. RARE holds at least one discussion session each month which is open to committee members and donors.

Most of the demands focus on education. They include increasing the voice of BIPOC at all levels of education, including local school boards; mandating thorough racial equity training of school faculties and staff; adding ethnic studies to curricula; and increasing and retaining educators of color. Local demands including firing Seattle Superintendent Denise Juneau (who has resigned), renovating Rainier Beach High School, cutting the ties between the police and the Highline School District, and abolishing the Highly Capable Cohort Program, an elementary school advancement program in Seattle schools which the students said favors white children.

Group leaders Mia Dabney, a junior at Cleveland High School, and Alexis Mburu, a senior at Foster High School, led the discussion. They opened by acknowledging that the area’s schools are located on indigenous lands, a statement they make at all their meetings. It reflects their value of inclusion, Dabney said.

They focused their discussion on cultural awareness issues and restorative justice, a system of justice that focuses on rehabilitation of offenders through reconciliation with victims and the community.

Cleveland High School has a restorative justice program, Dabney said. She shared specifics of how the program works to improve communication and understanding as an outcome of conflict instead of traditional punishments, such as suspension or detention. These steps include discussing the conflict, meeting with the “offender,” and discussions to clear the air. The conflict can be between or among any members of the school’s community. Peers facilitate meetings with peers as part of the practice. The King County Dispute Resolution Center has provided training for participants, which is in line with their demand for restorative justice to be practiced in schools.

“It’s a bad experience when no action is taken,” said Mburu, referring to unaddressed conflicts. Lack of action is a common complaint. In a past discussion, Roosevelt Principal Kristina Rodgers said that when students of color complain about how they are treated the students believe that their complaints fall on deaf ears. In restorative justice, people on both sides of the issue must be committed to resolution and be full participants for the process to work. All conflict resolution meetings are completely confidential, but Dabney shared an example of a mediation set into motion because one teacher had separated students into work groups by race.

“That wasn’t right,” she said, noting that most conflicts with teachers are rarely the student’s fault. It’s one reason for the demand for mandated frequent racial equity training.

The students are advocating for ethnic studies programs in all high schools, too.

“Every teacher should teach ethnic studies,” Mburu said, noting that the topic benefits both students and teachers. Ethic studies is available only to seniors at Cleveland. These students envision a curriculum in which contributions and accomplishments of people of color span all subjects and students of all grade levels. For example, the Pythagorean Theorem was discovered to have been used in old Babylonia as far back as the 20th century B.C. Knowing that people of color used it first was enlightening, she said, and it helped her to become more enthusiastic about math.

But does studying black history benefit black people or white people? Now that busing to improve racial balance is gone, how do white students in predominately white schools become involved in multi-cultural education?

The students shared that they understand that the history of black Americans can be gruesome, but that’s part of what makes it important. Most of history is whitewashed, they said, and often based on lies about people of color. So, it’s important that everyone understand history. They also suggested that schools open their cultural events to students outside of their school.

“We can reach out to others to help them learn,” Dabney said. “But we don’t have to be the teachers,” alluding to another common complaint that students of color are often sought out to help faculty learn about what to teach.

Organizations such as the NAACP can help, Mburu said. The organization has always had white allies. But leadership is important as students push to make changes.

Discussion participant Delbert Richardson commended the students for speaking unapologetically about oppression in educational systems. He floated an idea about a club for white students who want to be allies.

“That could be beneficial,” Mburu replied. “But who would keep them accountable? I’m not sure it would work.” She preferred the example of a white teacher who attends meetings of school affinity groups such as the Black Student Union, Asian Student Alliance, and others.

The local NAACP Youth Council is one of 600 chapters around the country that teach leadership and activism and foster youth involvement in politics and political issues for high school and college students. The demands were compiled from around the nation. The NAACP first formed youth councils in 1936. The local chapter was formed in 2018. The local NAACP gives the students a stipend to support their work.