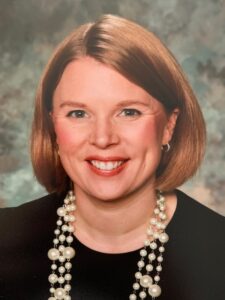 Roosevelt High School was in crisis last summer – a crisis of culture, conscience and identity.

“They weren’t new or unusual incidents,” said Kristina Rodgers, RHS principal. “But the timing (after the murder of George Floyd) was not coincidental.”

Rodgers shared that story with RARE committee members and donors when she led the March 15 RARE discussion session. She was invited to talk about what the school’s leaders are doing to improve racial equity and the racial environment at RHS.

Rodgers said that making progress means both learning and unlearning.

“What we learned was wrong, incomplete and fit a white narrative,” she said. “Black history has been erased.”

After last summer’s racial incident, Roosevelt had an awakening.

“I don’t have it all right,” Rodgers said of her own learning process. She likened learning about race to “cleaning out the garage” and deciding what can return to the garage and what goes to the dump. Still, it’s not a light lift.

“We have decades of upholding structural racism,” she said.

Rodgers shared some statistics about RHS. Roosevelt has 1,800 students. Of those:

The school is split evenly between male and female students and 150 students participate in Running Start, a program that allows students to earn college credits while still in high school.

Creating a positive racial atmosphere means changing the narrative around what Roosevelt means. The school has a reputation for sending its graduates to college and most of its students have the means to go. Ninety-seven percent of the students pass state exams.

“But who’s not passing,” she asked the staff. “We’re a public high school and we should serve all of the students.”

Rodgers has been serving Roosevelt’s students for 11 years, the last four as principal. She said that the school is working with a consultant who is advising them on how to improve the climate for students of color. The building leadership team is forming affinity groups to make safe spaces for everyone to learn.

RARE committee member Allan Bergano asked if the school would consider offering a class on racial diversity. Rodgers said that teachers are feeling more comfortable talking about race now and that the school district is rewriting the curriculum to enable classes to be taught through the lens of diversity.

Deborah Gallaher, the school’s librarian, commented that Latinx students have been asking for more books that reflect their experiences and that there is lots of opportunity to improve the library’s collection. Gallaher looks forward to assembling a committee of students and staff to review the collection and recommend books.

Books need to reflect more than a white narrative when the school adds books about people of color, Rodgers said.

“Suspension isn’t a cure,” Rodgers said, noting that the suspended student gets what feels like an unplanned vacation. Instead, she wants to use restorative justice, the practice by which the offending student takes meaningful actions to right the wrong. Neither the school nor the school district is up to speed on how that would work in a school setting.

Rodgers also addressed the current ethnic make up of the teachers, which is overwhelming white. Sadly, many teachers of color pass on joining Roosevelt’s faculty because of its reputation as a white space.

Once the school meets its goals to improve the racial atmosphere, what does success look like? Rodgers’ list of goals is long. It includes having staff that is trained to deal with racial incidents and understanding the experiences of Roosevelt’s families of color. But fixing the white norm looms large.

The school needs open dialogue among students, faculty and staff, and that white people need to acknowledge the lived experiences of people of color, Rodgers said. Building leadership can’t fear standing their ground on improving the racial climate.

“It’s hard to measure,” she admitted. Students in athletics accept diverse and cooperative spaces. Clubs such as the Black Student Union, La Raza, Asian Alliance and the Gay-Straight Alliance offer safe spaces for students to gather around their specific issues. The good news is that the clubs attract allies who offer support. Students in special education integrate the most successfully.

She said that school leadership would have to break the mold that defines the Roosevelt student in order to create a welcoming campus.

“If they say that they aren’t believed, we have a problem.”

The system favors white people, she continued. It was made by white people and awareness is critical.

It’s not the job of the students of color to teach others, which happens often. That includes faculty and staff, who ask the kids for help understanding students’ history, traditions and issues, Rodgers said. Also, white people often respond defensively while talking about race.

“White people walk through life and they don’t see race,” she said. “They don’t have to.”