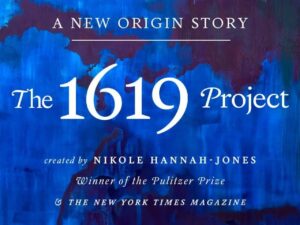 There have always been a few particular dates in American History that have stood out and have been taught as seminal years in classrooms for over two centuries. 1776, the year Americans declared their independence in a document that declared that “all men are created equal”, certainly comes to mind; as does 1789 when the Constitution of the United States endeavored to make us a more “Perfect Union”. 1607 brought the first permanent English settlement in what was to become the United States. And in 1622 The Mayflower brought a group of religious pilgrims across the ocean to Massachusetts Bay where according to American lore the annual rite of Thanksgiving began.

One particular year that was as momentous and significant in the growth and identity of the United States as any of those listed above was 1619. Yet until three years ago, very few Americans knew of its importance.

That changed when Nikole Hannah-Jones spearheaded The 1629 Project, an accumulation of writings from various journalists, herself included, that are centered around the Black experience in America that began with the arrival of a Portuguese ship, The White Lion, with over twenty captive Africans aboard in Virginia in 1619. The writings appeared in the New York Times Magazine in 2019, to highlight the 400 year anniversary of the arrival of Black people in America.
The initial writings were followed by a series of podcasts and lesson plans for further education, and finally the publication in 2020 of book, A New Origin Story-The 1619 Project. The book includes the original eighteen essays as well as added poetry and photographs.

Hannah-Jones, who writes for the New York Times, was awarded the Pulitzer Prize for her eﬀorts. The project and the book have been hailed by civil rights’ advocates and educators across the country for their illumination of the impact of the African slave trade on the United States.

There also was considerable blowback to The Project, which was to be expected in an increasingly polarized country where even history has its sides. Yet even in times of great polarization, the virulent criticism, mainly from some Republican politicians and right wing media, was extraordinary. They denounced The 1619 Project as divisive, unpatriotic, revisionist, and denigrating of the country’s founding principles. It was even called racist.

Some Republican members in Congress threatened to withhold federal dollars to schools that taught the book. Seizing on and amplifying the outrage, then president Donald J. Trump denounced The 1619 Project and ordered the establishment of a 1776 Commission that produced a “patriotic” version the country’s founding.

Hannah-Jones also garnered criticism among some prominent historians who disagreed with some of her assumptions: most prominently her stating that 1619 is the true founding of the United States; and that the colonists took up arms agent the King to protect slavery. (The book version changed the word all to some when citing that protecting slavery was the primary reason for separation from England.) New York Times writer Adam Hochschild wrote an excellent take on the book, The Project, and the critical reaction to them in the New York Times. He is both critical and laudatory of the work and, particularly praising how the various writers showed “unexpected” links between the past and present”.

The criticism of The 1619 Project, both scholarly and political, can not conceal, nor should it detract from, the horror and brutality that was slavery in America; nor can it hide the racist Jim Crow policies of the South as well as those of the US government that denied most eligible Black Americans the benefits of the GI Bill and FHA loans that built a strong white middle class.
The 1619 Project sheds light on much of the American story; not just the cruelties that slavery was and that racial discrimination is, but also on the founding and enormous growth of the United States in which the invaluable contributions of Black Americans were there from the beginnings, before The Mayflower, in 1619. A year that Americans are now more likely to remember.

Last October 3, RARE Board and Committee members met on Zoom to discuss the book, A New Origin Story: The 1619 Project. Lea Vaughn moderated a lively discussion. Because of the book’s volume and the interest in discussing it, another Zoom discussion about The 1619 Project is in the works. Stay tuned!