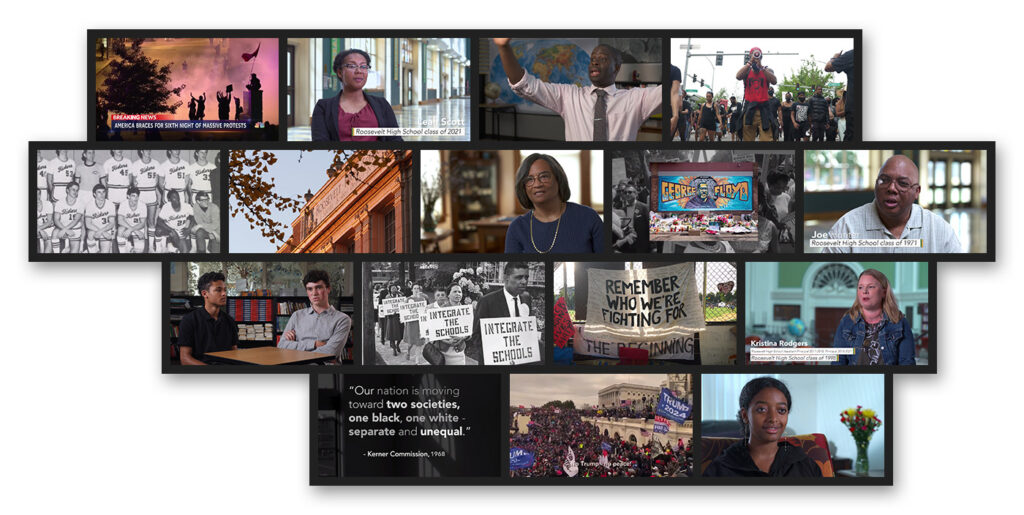 The two former basketball teammates, one Black and one White and co-founders of Roosevelt Alumni for Racial Equity, agree that not much has changed regarding the racial climate at Roosevelt and they wonder why. So, as one of the founding projects of RARE, a group of classmates formed to work against racism, they decided to make a documentary about Seattle’s efforts to desegregate the schools.

The result is Roosevelt High School: Beyond Black & White, a 30-minute film that chronicles the city’s attempts at desegregation, focusing on Roosevelt High School. The film, in addition to a trailer, discussion questions, a curriculum guide and other materials, is available for viewing on this page.

Seattle’s schools are as segregated now as they were before the first busing program started, and the film explores the human side of how the students coped with the programs. White people in Seattle believed that segregation was a Southern issue, not a Seattle issue. But with an NAACP lawsuit threatening the district, Seattle began a half measure – the Voluntary Racial Transfer Program, in which students would volunteer to attend schools in which they would be in the minority.

So, in the late 1960s when the program began, the burden of integration fell on Black students and other students of color who volunteered to attend majority white schools like Roosevelt. Few, if any, White kids participated.

“One day, a couple of us were walking down the hallway and we noticed sayings on the water fountains. ‘Colored.’ And ‘For Whites Only,’” said Carl Copeland, who is Black, in the film. “It was straight out of Mississippi or something.”

“I can remember in my English class there was a guy from Windermere who wouldn’t sit next to me and scooted his desk as far away as possible,” Lea Vaughn, a Black alum recounts.

Desegregation didn’t especially mean integration. Allison and Hunter played basketball together and respected one another as teammates usually do, but they didn’t become close friends. Others interviewed for the film remember lunch tables separated by race and city buses in which the White kids sat in the front and Black kids sat in the back. Allan Bergano, who was bused, compared the social separations to “coffee breaks” — breaks from the pressure of classes with White students.

Allison, a White alum, got to know some of the Black students through sports.

“I still only had a vague sense that they (Black students) came from the Central Area and that they had to ride a bus, usually there and back each day, and they had to cope with a hugely predominant White culture,” he said in the film.

The city suffered from the remnants of redlining – the historical practice of housing discrimination, which kept people of color penned into segregated neighborhoods. Many of those vestiges remain to this day.

Ultimately, busing didn’t help. When it became clear that White kids weren’t getting on buses, the school district came up with the “Seattle Plan,” which would require White students to participate. But instead of participating, White parents pulled their kids out of public schools in droves and sent them to private schools. Some families simply moved away from Seattle entirely.

“I think we used busing as a Band-Aid for redlining,” Vaughn said. “We never really dealt with it.”

Roosevelt was well integrated by the 1980s and early ‘90s. But by the late 1990s, the district gave up, redrew school catchment areas, and everybody returned to attending neighborhood schools.

It wasn’t all bad, though.

“The voluntary busing program, again from my perspective, was a success largely because of Tony and I are sitting here today talking,” Hunter said. Indeed, RARE is comprised of White alumni and alumni of color. Most of the members knew one another in high school. The group works to improve racial equity at Roosevelt and looks forward to collaborating with other schools. In its first year, the group raised enough money to endow and award two $5,000 scholarships for RHS students of color in need.

“You don’t want to be like Tony and I, 68-years-old, 50 years later, talking about the same things that we talked about 50 years ago,” Hunter said.

“If we don’t really get involved, I think that we’re right back at the Kerner Commission again – two nations, separate and equal, one Black, one White,” Vaughn said. “Who wants to live there?”

The film includes interviews with Roosevelt administrators, a school board member, and alumni who are more recent graduates. It was produced by filmmakers Fox Wilmar Productions of Seattle. The film is available to screen in high schools.

To view the film, visit the documentary film page on the RARE website. This page also includes a film trailer, discussion questions, a curriculum guide and other materials.